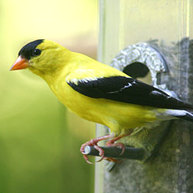 Critter of the Week
American Goldfinch

​
​
​The American goldfinch (Spinus tristis) is a small North American bird in the finch family. It is migratory, ranging from mid-Alberta to North Carolina during the breeding season, and from just south of the Canada–United States border to Mexico during the winter.
The only finch in its subfamily to undergo a complete molt, the American goldfinch displays sexual dimorphism in its coloration; the male is a vibrant yellow in the summer and an olive color during the winter, while the female is a dull yellow-brown shade which brightens only slightly during the summer. The male displays brightly colored plumage during the breeding season to attract a mate.
The American goldfinch is a granivore and adapted for the consumption of seedheads, with a conical beak to remove the seeds and agile feet to grip the stems of seedheads while feeding. It is a social bird, and will gather in large flocks while feeding and migrating. It may behave territorially during nest construction, but this aggression is short-lived. Its breeding season is tied to the peak of food supply, beginning in late July, which is relatively late in the year for a finch. This species is generally monogamous, and produces one brood each year.
Human activity has generally benefited the American goldfinch. It is often found in residential areas, attracted to bird feeders which increase its survival rate in these areas. Deforestation also creates open meadow areas which are its preferred habitat.
wikipedia 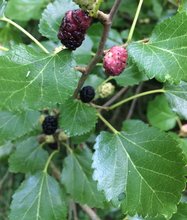 Plant of the Week
Mulberry Tree


​Red mulberry is a deciduous tree, growing to 10–15 m (35–50 ft) tall, rarely 20 m (65 ft), with a trunk up to 50 cm (20 in) in diameter. It is a small to medium-sized tree that reaches a height of 70 feet and lives up to 125 years. The leaves are alternate, 7–14 cm (2 3⁄4–5 1⁄2 in) long and 6–12 cm (2 1⁄4–4 3⁄4 in) broad, simple, broadly cordate, with a shallow notch at the base, typically unlobed on mature trees although often with 2-3 lobes, particularly on young trees, and with a finely serrated margin. The upper surface of the leaves is noticeably rough, similar in texture to fine sandpaper, and unlike the lustrous upper surface of the leaves of white mulberry (M. alba). The underside of the leaves is covered with soft hairs. The leaf petiole exudes milky sap when severed. Red mulberry is hardy to subzero temperatures, relatively hardy to drought, pollution, and poor soil, though the white mulberry is hardier.
The flowers are relatively inconspicuous: small, yellowish green or reddish green, and opening as leaves emerge. Male and female flowers are usually on separate trees although they may occur on the same tree.
The fruit is a compound cluster of several small achenes surrounded by a fleshy calyx, similar in appearance to a blackberry, 2–3 cm (3⁄4–1 1⁄4 in) long, when it is ripening it is red or dark purple, edible and very sweet with a good flavor.
wikipedia
"Every great dream begins with a dreamer. Always remember, you have within you the strength, the patience, and the passion to reach for the stars to change the world." - Harriet Tubman

The Road to Freedom